Skyscapes, Landcapes and the drama of Proto-Indo-European myth. 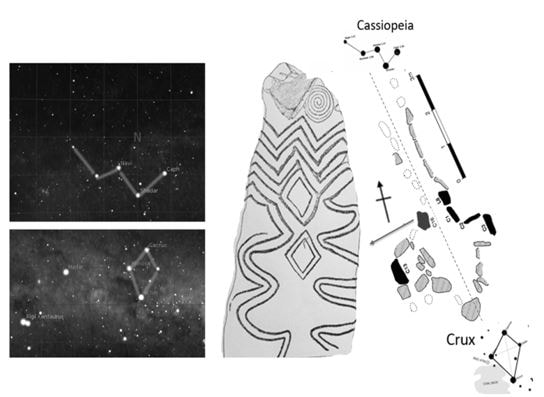 ​Following the work of Larsson and Kristiansen’s ‘The Rise of Bronze Age Society’ (2005) that utilised Indo-European myth to shed light on the iconography of Bronze Age Scandinavian art, this thesis postulates a similar relationship between Proto-Indo-European mythology and the ceremonial sites of the British Neolithic, arguing both, at root, share a derivation from astronomical imagery, which suggests the ’skyscape’ was as important to the builders of these monuments as the ‘landscape’, if not more so.

The mythological material utilised in this study is reconstructed using extant comparative Indo-European literature and is based on comparative linguistic reconstructions, while the archaeological data is taken from 55 sites (50 henges or associated circular timber structures, and 5 passage graves). The hypothesis that such structures are oriented on astronomical events is tested, with specific case studies explored in detail (Stonehenge, Avebury henge, the Sanctuary, Woodhenge, Thornborough, Bryn Celli Ddu, Barclodiad y Gawres and Yeavering). The analysis demonstrates a concentration of alignments on the rising and setting of certain stars within the Milky Way (those of Cassiopeia and Crux) on or around the Winter Solstice, on the rising and setting of Orion, and with the rising of the sun as it crosses the Milky Way around the start of May. These alignments often utilise local landscape features such as hills (or artificial mounds) and rivers and are linked to ritual deposition of cattle remains – all facets that can be explained in terms of the Proto-Indo-European cosmology reconstructed within this thesis, which, it is argued, is ultimately of Neolithic Near Eastern pedigree.

This thesis not only provides evidence of a Neolithic ‘shaping mythology’ that Richard Bradley in his ‘On the Significance of Monuments’ (1998) suggested might lie behind the form and function of ritual sites, but also suggests that astronomical symbolism (especially concerning the Milky Way) was at the heart of both this Neolithic myth and the rituals performed at such sites.
Link to full text (PDF)